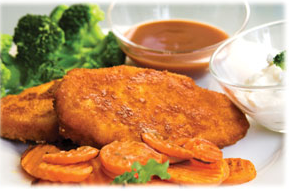 Children and adults love fried foods! There are chicken nuggets and fingers for the kids, and breaded calamari and schnitzel for the adults.

As demand continues to grow, so does the requirement for crispy, crunchy and flavourful fried products. To the food processor, these coatings involve more that just tasting good – as they may also need to prevent oxidation, limit moisture and oil transfer, provide freeze/ thaw stability, and extend shelf life.

Stuffings are being used by chefs and food processors to extend the variety of flavours and the number of options for meat dishes, in applications ranging from seafood to pork.

The Colonel’s 11 Herbs and Spices

Colonel Sanders experimented with chicken recipes as early as the 1930’s, when he had his restaurant, Sanders Court & Café, in Corbin, Kentucky. His food experiments included using the pressure cooker, and he was able to make a great tasting fried chicken quickly.

The Colonel Sanders chicken franchise started in 1952, as the Colonel traveled across the United States demonstrating his pressure-cooked, deep fried chicken.

By 1964, there were more than 600 franchised outlets in North America. Colonel Sanders died of leukemia in 1980, and his special recipe remains locked away in a safe in Louisville, Kentucky.