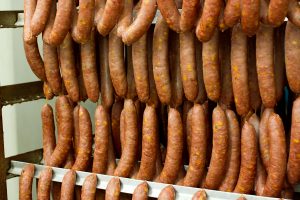 Smoked sausages are made of cured meat and can be further subdivided as:

The step which differentiates smoked sausages from others is the addition of sodium nitrite (Sure Cure). This is a must procedure when smoking meats below 170° F (77° C) smoke temperature. Although cases of food poisoning by Clostridium botulinum are very rare, they have one thing in common: they are fatal. If every manufacturer adds nitrite to naturally smoked meats to protect the consumer, a hobbyist should do the same to protect his loved ones. Smoking is done at temperatures from 50° F (10° C) to 140° F (60 °C) and depending on a particular smoker, the humidity levels and the amount of fresh air varies too. The combination of low temperature with evaporating moisture from the sausages and the absence of oxygen creates the right conditions for the growth of the Clostridium botulinum pathogen, the strongest poison known to man.

Many people say they don’t use nitrites when smoking meats. Most of them barbecue or grill meats at high temperatures which kill all bacteria, including Clostridium botulinum. They cook meats with smoke which is not the same as the classical meat smoking method. Adding nitrite not only protects against pathogenic bacteria, it provides us with such benefits as a characteristic cured meat flavour, pink colour that is liked and expected by the consumer, delays the rancidity of fats, delays meat colour change due to light and oxygen.

A common question is: can I smoke meats without nitrite? Of course you can. As we have explained above you have to smoke your sausage at above 170° (77° C) which will affect its texture and will produce an inferior colour due to the lack of nitrite. The sausage will be most likely greasy on the outside. You may like it, but a commercial plant can not produce inferior products which will not be purchased by the consumer.

Colour of a Smoked Sausage

Cold smoked products develop a yellow-gold colour. As the smoking progresses the colour will become light brown and then dark brown. Keep in mind that cold smoking continues for days, even weeks at a time with occasional breaks in between.

Hot smoked products are smoked in a matter of hours. The colour depends mainly on the length of smoking. The colour will start changing from light brown to dark brown. The type of wood will influence it as well, oak smokes in brown colour, hickory smokes reddish-brown. Heavy smoke will increase the amount of smoke deposition.

Keep in mind that sausages owe their characteristic flavours to the different spices they contain. Long smoking with heavy smoke can overpower these subtle spice aromas. A sausage will become nothing else but a piece of meat with a heavy smoky flavour. Smoking a thin 1/2” piece of meat like jerky for 3 hours applying heavy smoke might make it bitter and non-palatable. When smoking, the rule ”easy goes a long way” holds very much true. Large pieces of meat such as hams, bacon, and loins will require longer smoking times and should be smoked until the typical dark colour is obtained.

Using softwood from evergreen trees will make casings much darker, even black due to the deposits of tar and resin that this wood contains. Wet casings or excessive levels of humidity in the smokehouse will create darker casings and impede the smoking process.

The Length of Smoking

This criteria is very loosely defined. In most cases smoking is done when the desired colour is obtained. Preservation is accomplished by cooking and keeping the product in a refrigerator, and smoking today is just a flavouring step. In the past, cold smoking/drying continued for weeks as it was the preservation method.

Hot smoking is performed with a dense smoke and smoke deposition is more intense at higher temperatures. About one hour of smoking time for 1” (25 mm) of sausage diameter is plenty. If your sausage is stuffed into 36 mm casing 1½ hours is fine. Nothing will happen if it is smoked for 2 or 3 hours, the smoky flavour will be more intense. Smoking much longer with a heavy smoke might create a bitter flavour.

In the past the most common smokehouse was the so called gravity smokehouse which sometimes was quite large. Meats were hung on different levels in a smoking chamber and the smoke would rise up using a natural draft. Sausages hanging higher will pick up moisture from the sausages below and they will become wetter which will affect the colour and flavour. Being wet they will attract more soot and other unburned smoke particles. Smoke and heat distribution would differ in different areas of the chamber especially if the smokehouse was of a large size. If smoking continued for a long time those would become serious problems if left untreated. Periodic rearranging of the smoke sticks would correct those problems. Keep in mind that a large smokehouse had many levels of smoke sticks that were loaded with sausages or fish, but the fire pit generating smoke or supplying heat was located at the bottom. In today’s units electrical blowers force smoke or hot air into all areas of the smokehouse and the temperature and relative humidity are easily controlled.

To the best of our knowledge, the above information is accurate and reliable, and is offered solely for consideration and assistance without any warranty or guarantee.