The Magic Behind Fermented Sausages – It’s All About Bacteria

Making fermented sausages is a combination of the art of th 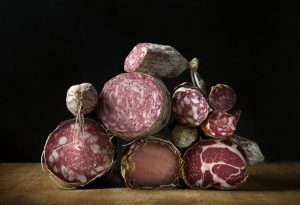 e sausage maker and unseen magic performed by bacteria. The friendly bacteria are working together with a sausage maker, but the dangerous ones are trying to wreak havoc. Using his knowledge the sausage maker monitors temperature and humidity, which allows him to control reactions that take place inside the sausage. This game is played for quite a while and at the end a high quality product is created.

We all know that meat left at room temperature will spoil in time and that is why it is kept in a refrigerator/freezer. Yet fermented or air dried sausages are not cooked and don’t have to be stored under refrigeration. What makes them different? Fermented sausages and air dried meats are at an extra risk as in many cases they are not subject to cooking/refrigerating process. In a freshly filled with meat casing, bacteria seem to hold all advantages:  temperatures that favor their growth, moisture, food (sugar), oxygen, we have to come up with some radical solutions otherwise we might lose the battle. Fortunately, meat science is on our side and what was a secretive art for many years is being revealed and made accessible to everybody today. Even so, manufacture of fermented products is still a combination of an art and technology.

A meat processing facility develops its own microbiological flora in which bacteria live all over the establishment (walls, ceilings, machinery, tools etc). Each place will have its own peculiar flora and some places will contain more bacteria which is needed for making fermented sausages. Keep in mind that in the past meat facilities were not sanitized so scrupulously as the ones of today. These bacteria are just waiting to jump on a new piece of meat and start working in. All they need is a bit of food: moisture (meat is 75% water), oxygen (the air) and sugar (meat contains sugar). Sugar has been introduced into sausage recipes for hundreds of years as somehow we have always known that it is needed.

Fermented sausages are made by use of “beneficial or friendly” bacteria that we manipulate to our advantage and they become microscopic labourers performing tasks that we can not do ourselves. They are the tiny soldiers and we are the command center and if we manage this army well they become a formidable force. All this bacteria talk should not alarm anybody as we are surrounded with fermented foods: sour bread, wine, yogurt, sauerkraut, cheeses, etc. Some of the most dangerous bacteria (E.coli and Listeria monocytongenes) live in our digestive tract and help us to digest foods, other (Staph.aureus) are present in our skin, mouth and nose. The most toxic poison known to men is in soil (Clostridium botulinum) and we touch those spores every time when working the garden, yet we are perfectly fine. Dangerous bacteria are present in meat and we eat them every time when under cooked meat is served and that does not seem to affect us either. This is due to the small number of bacteria present and if their number were higher our immune system would not be able to fight them off.

In regards to sausage making we could divide bacteria as:

Spoilage
These bacteria cause food to deteriorate and develop unpleasant odors, tastes and textures. These one-celled microorganisms can cause fruits and vegetables to get mushy or slimy, or meat to develop a bad odor. Most people would not choose to eat spoiled food. However, if they did, they probably would not get sick.
Dangerous
These are known as pathogenic bacteria and they cause illness. They grow rapidly in the “Danger Zone” – the temperatures between 40º and 140º F (4-60º C) – and do not generally affect the taste, smell, or appearance of food. Food that is left too long at unsafe temperatures could be dangerous to eat, but smell and look just fine. E.coli 0157:
H7 (Most illness has been associated with eating under cooked, contaminated ground beef), Campylobacter (Most cases of illness are associated with handling raw poultry or eating raw or under cooked poultry meat), and Salmonella (Salmonella is usually transmitted to humans by eating foods contaminated with animal feces. They are often of animal origin, such as beef, poultry, milk or eggs. Chicken meat is known to contain more Salmonella than other meats. Staph.aureus is hard to control and to inhibit its growth Aw must be lower than 0.89 and pH below 5.2. Cl.botulinum, very toxic and heat resistant, likes moisture but hates oxygen.
These bacteria can be managed to our advantage to produce fermented sausage. They are naturally occurring in meat and are responsible for:

To produce a quality safe product it is necessary to:

To eliminate the risk of bacteria growth and to prevent meat spoilage we employ the following steps, also known as “hurdles”:

To the best of our knowledge, the above information is accurate and reliable but is offered solely for consideration and assistance without any warranty or guarantee.